The 2022 Nissan Frontier is a basic mid-size pickup truck that is not as good as most of its competition. It provides power of up to 310 horsepower and V6, joined with a nine-speed automatic transmission.

Keep reading to find out some more exciting features of the 2022 Nissan Frontier. This Frontier was looked forward to by many as the last Frontier came out in 2005, a really long time ago. Lucky, it is far better than the old one. It comes with a new look and improved technology.

Under the vehicle’s hood is a powerful 3.8L V6 which, as stated earlier, produces up to 310 horsepower. This new development makes it the most powerful mid-size truck you can find. It has a starting price of about $28,500 with shipping.

The Frontier comes in two different types; the PRO 4X and the PRO X. The PRO X has all the features of the 4X, but the only difference is it is a two-wheel drive.

Features of the Nissan Frontier

Yes, the moment we have all been waiting for. Let us look at the features this new pickup truck has to offer.

Unfortunately, the steering wheel is still the same old, with just a little bit to look forward to as it was borrowed from the old Nissan Pathfinder. The wheel does not come in or out; instead, it is restricted to only going up and down.

This is disappointing because the dashboard is on the lower side. It is an intrusion into the driver’s space. Meaning, the taller you are, the more difficult it will be to feel comfortable.

Since the steering wheel does not move out, the driver cannot bring it closer and back up the seat. Now they have to drive throughout their journey with compromised knee space.

There are some new safety features you can find on the steering wheel, such as automatic braking, adaptive cruise control, and automatic reversing braking. The gear selector is also the same old upright traditional selector, unlike the new modern ones you see in vehicles today. When shifting into reverse, the backup camera situated above the gear selector does not do you much justice.

It has a meager resolution and poor camera quality. The good thing is, there is a top to the bottom 360-degree camera, which allows the drivers to see everything they need to see.

There is a massive improvement in the infotainment system compared to the old Frontier. A center touchscreen is easy to use and has some hard buttons below it, which help you to switch between menus. Users cannot find the climate controls on the center touch screen but somewhat below it. There are hard buttons that allow you to adjust the climate without using a screen.

There is an option for heated seats and a heated steering wheel, something to also look forward to trying out.

The truck’s interior design is perfect when you are not looking for anything too flashy. That is, after all, the target audience of the pickup truck.

A wireless charging pad is situated in the center console, which is a massive step up compared to the old Frontier. You can also find a Fender audio system and all leather seats.

The dashboard is not left out as it has some cool features. The lane departure alerts you when you are leaving your lane and the gauge cluster a little bit below it.

The gauge cluster screen is not full, is entirely straightforward, provides good information, and has no luxurious features. There are two physical gauges on the side.

Another cool feature is the dial that helps you shift into a four-wheel drive. The cool part about this feature is that a camera is turned on in the front of the truck, and it shows on the center screen, allowing you to see whatever you want to see.

The back seat is cramped with very little space, and the rear seat is highly upright. This can be very uncomfortable for passengers. There are three power outlets at the backseat (USB-c, USB-a, and a household-style outlet).

You can bring the seats down if you want a flat space, and the upper part of the seats can be raised, leaving a bottom portion. The base platform helps to protect the leather seats from stains and whatnot.

The passenger side has a little storage area underneath it when raised. There are little Nissan accessory bags in the storage area, the first bag being a first aid kit. The exterior design of the Nissan Frontier has even more cool features than the interior design. The wheels are very pleasing to the eyes, and the tires are all-terrain tires, making it easier to drive off-pavement.

There is a Bilstein suspension, which makes the off-road capabilities better than average. Nissan claims that this truck is better than its off-roader rivals because of the front-end design, which gives an approach angle of about 33 degrees.

A skid plate is situated underneath the front of the vehicle, which also makes the off-road capabilities better, and every pro 4x model comes with a locking rear differential.

The truck is not over-styled, neither does it have a different look. It is simple but also looks tough and rugged. Nissan says the truck was designed to look as if it was “chiseled from a solid block.”

The Nissan logo on the front of the truck is different. It is red, other than the usual white seen, and it is a new logo. This logo is modernized compared to the old Nissan logo used in the old models.

There is nothing special about the bed; the most remarkable features are in full-size trucks. There are bed rails and a charging outlet on the side of the bed. The bed was raised two inches higher, allowing more cargo space.

This is an excellent choice for drivers who love the old Nissan Frontier and are looking forward to getting an updated version. Also a perfect choice for anyone looking for a new mid-size truck in general.

With its new safety features, updated technology, and powerful engine, you cannot go wrong with this one.

The 2022 Hyundai Tucson Hybrid: This SUV Looks Crazier Than It Is.
Next Article 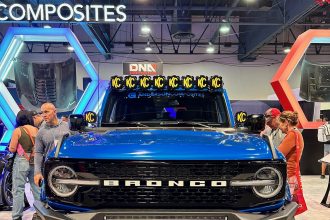